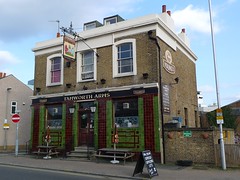 The Tamworth Arms was a Young's pub in Croydon, on the corner of Tamworth Road and Tamworth Place round the back of the Centrale shopping centre.

It closed down in June 2015, with a notice in the window photo reading "Closed Due to unforseen [sic] circumstances until further notice".

There's some rather nice tiling to the front of this small, backstreet pub, and the decor within is traditional. There are a couple of picnic benches out the front, and there's also an enclosed decked beer garden photo. Around the back of the bar is a dartboard.