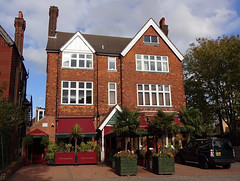 Pan-Indian restaurant and hotel in Bromley, in the 2007 Good Curry Guide.

Entry is via a plant-lined, awning-covered walkway leading from the pavement to the front doors. Once inside the small lobby, there's an equally-small bar on the left with seating for around a dozen, and a two-part dining room on the right. A small hotel reception desk is ahead, with a door to the side giving access to the first floor bar and the toilets, the latter of which bear warnings on their doors that "Ancient Indian artwork of an adult nature" is displayed within.

The decor seems to be aimed at evoking the atmosphere of a private club during the British occupation of India, echoed by their website's proclamation of "Welcome to the days of the Raj". Vintage photos of India, Indian people, and non-Indian people in India hang on the walls, and ceiling fans turn slowly overhead (even on a chilly day in October). Indian instruments are mounted on the walls too, including a sitar and tabla. Tables are covered with white linen tablecloths and ready-laid with wineglasses, linen napkins, side plates, and cutlery for starters, mains, and desserts. Wine coolers stand ready to the sides.

Kake and Ewan visited on a Monday lunchtime in October 2018. Arriving just before their opening time of noon, we were the only customers, and this remained the case throughout our visit. Music was playing, not too loud.

Baingan ka bharta (smoked mashed aubergine with chillies, ginger, and coriander; £12) photo was a little oilier than ideal, masking both the subtle texture and the flavour of the aubergine itself.

Pindi chole (chickpeas with Assam tea and onion; £12) photo had an interesting flavour but was perhaps a little salty.

A side dish of bhindi do pyaza (okra with onion, tomato, and red peppers; £7.50) photo was Kake's favourite of the lot; the okra was cooked just right, and there was a nicely lemony note to the dish.

Steamed rice (£4) was fine; cooked just right and with a good flavour.

Service was formal rather than friendly, and perhaps a little slow; our lunch took somewhat longer than we'd intended. Tap water arrived swiftly on request, served from a jug with ice, though we had to ask for it to be refilled. Hot towels were brought at the end of our meal, along with a crumb scraper to clean off the tablecloth. A 12.5% service charge was added to the bill.

Accessibility: Two steps to get in, one of them very large, with no handrail. No further steps to the seating or toilets.