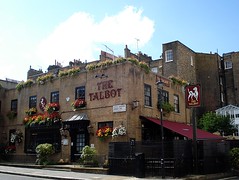 The Talbot was a decent if fairly anonymous pub in Belgravia. According to the Jun/Jul 2016 London Drinker, it closed in 2013 and permission was granted in 2015 for it to be demolished and turned into flats.

A decent if fairly anonymous pub in Belgravia.

The interior is L-shaped, with the smaller leg of the L being similar to a public bar and the longer leg being more saloon-like. There's plenty of standing room inside plus a range of different types of seating (normal chairs and tables, high stools and tables, mini-armchairs, on a couple of levels), with tables set out for food service near the back. The decor is perhaps best described by quoting the Fancyapint review linked below: "hotel-lobby carpet and magnolia wall[s]". There's also a small patio garden at the front.

There are two ale handpulls, serving Deuchars IPA (the other was off) in July 2010, as well as the usual range of draught lagers and Strongbow cider.

DrHyde visited in July 2008. The beer was well-kept, and the staff were friendly. There was background music, but it was neither offensive nor loud, and the TVs were playing with the sound off. Unfortunately, it was all let down by bad food.

Kake visited on a Friday afternoon in August 2008. All the clips were turned around on the handpumps, and the barmaid claimed (in contradiction to the experiences noted above and the BITE comments linked below) that they never have any real ale. So I had a half of Strongbow, which was £1.55. I was there around 2:30pm, and there were about 15-20 other customers and a lively buzz of conversation (mostly in the "public bar" side). As on DrHyde's visit, the music wasn't obtrusive. The staff were diligent about cleaning tables after people departed, but less diligent about checking the toilets — neither cubicle in the ladies' had any loo roll.

They may serve food all day; on Kake's August 2008 visit a couple of people ordered food a little after 3pm.

Accessibility: A step up to the main entrance, but inside the pub everything is on one level with no steps. The toilets (ladies' at least) are very cramped, though.