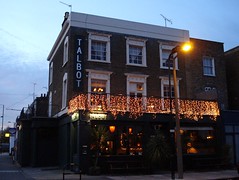 Pub in De Beauvoir Town, North London. It had a brief stint in the Good Beer Guide in 2007, but fell out again the next year. Apparently owned by a small local chain.

It's more of a bar than a pub, really; it's not open in the daytime except on weekends, and the lighting is kept very low. The single room features a number of large leather sofas and easy chairs clustered around long, low coffee tables positioned just far enough away from the sofas that short people like Kake need to lunge slightly to reach their drinks. The rest of the seating is wooden tables and chairs. The floor is bare floorboards and there are large windows at the front and a large ornate mirror opposite. Once the sun's gone down, the lighting is only really adequate to let you read a book if you sit on the sofa flanked with standard lamps.

Kake visited on a Thursday evening in November 2008. The two handpumps on the bar had Harveys Sussex Best (£3/pint) and Tim Taylor Landlord. There was music playing, sort of soul/R&B, at a volume which would probably be annoying if there were conversations going on, but was fine since I was the only one in. There still weren't any other customers in sight when I left around 5:15pm for the (rather better populated) Scolt Head down the road.