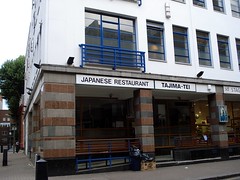 A very nice Japanese restaurant just at the end of Leather Lane in Holborn. Highly recommended, though not cheap. Many times I've been there, all of the customers except us seemed to be Japanese, which is generally considered to be a good sign.

There are tables plus about 6 or 7 seats at the sushi bar; they also have a couple of private rooms which you can book.

When it's not too busy, the service has been very friendly and helpful, and the waitstaff seemed quite happy to explain what the fish we didn't recognise were. On Kake's last visit, the service was a little disorganised (everyone's food arrived at different times), but in their defence it was a busy Friday evening and we were a party of eight who hadn't booked.

The Omakase Sashimi (chef's selection) at £23 (a price that hasn't changed in at least four years) is well worth it; good quality and a good-sized portion. One order per person is ample, but this might be a good one to share if you want to have another dish as well as sashimi (I don't know if sharing would be considered rude or not, mind).

There is (or at least, there was in 2003) a separate vegetarian menu, which you may have to ask for. When I (Kake) ate here with Mike, he had the vegetarian set dinner at £25 (price as of July 2003) and I stole bits of almost every course — it was very good, with a vinegared seaweed salad to start, then spinach with sesame seeds and miso, then half an aubergine baked with bean paste, then rice and veggie tempura, and finally a choice of vanilla icecream or coffee. Mike is vegetarian and comes here a lot, so this would seem to be a good place for veggies.

Kake wrote in 2003: Make sure you try the green tea icecream (£3.60, or £3.90 with sweet red bean paste, which is also very good). The coffee isn't bad, but for some reason comes with a little pot of fake creamer instead of real milk or cream. Didn't have dessert or coffee on my most recent visit (2007), so don't know if this is still the case.