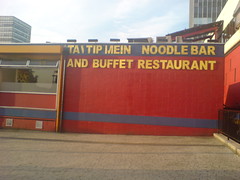 Tai Tip Mein was a noodle bar and all you can eat Chinese buffet at Elephant and Castle. It was forced to close in September 2020 due to the impending demolition of the shopping centre, and according to Eater London as of that date did not yet have new premises lined up.

This is a noodle bar and all you can eat Chinese buffet at Elephant and Castle. It is just outside the shopping centre on the southern roundabout, next to the bus stops which are near the Northern Line station.

secretlondon went to the buffet in September 2008. It was a Saturday so it was £10.50, and 80p for Chinese tea. According to signs it is cheaper on Sundays, lunchtimes and Monday to Thursday. Takeaway containers are also £5. They are licenced.

There were about 40 different things to choose from, including duck (with pancakes, hoisin sauce and salad). There was quite a good selection of seafood including mussels and salmon. A separate table has cold desserts and fruit.

It wasn't so good for vegetarians as there were no tofu dishes and the vegetable dishes seemed to be more like sides. A vegetarian could eat here, but not as well as a meat eater.

The food was fine and wide ranging. Even paying peak prices it was still clearly good value.

The toilets were not very good though. There were only two female cubicles, the one secretlondon went into had an unscrewed toilet seat, a full to overflowing bin and was blocked by a large amount of popcorn (?). I can understand that Saturday is busy but there is no excuse for a loose toilet seat.

secretlondon visited again one weekday evening in January 2009. It was about £8.50 for the buffet and £1 for Chinese tea. They are also licenced and have free tap water on the bar. The food was as good as before (but with less seafood) and the toilets were still awful.