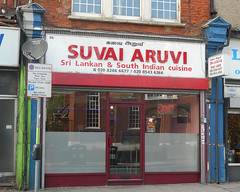 Sri Lankan cafe/takeaway in Colliers Wood. They also do some South Indian dishes, and will deliver locally (free for orders over £20, as of September 2009).

It really feels more like a takeaway that happens to have some tables for customers who want to eat in, rather than a cafe per se. The menu photo 1, photo 2 is even photocopied. There's seating for about 24 people, give or take. They aren't licensed, and we're not sure if you can BYOB.

bob and Martin visited on a Thursday evening in September 2009. When we arrived at about 9:30pm, there was only one other customer, though two people came in for takeaways while we were there. We didn't notice whether the TV mentioned in the Time Out review (linked below) was still there, but if it was there, it wasn't switched on. There was no background music playing either.

Like many of London's Sri Lankan cafes, the starters are displayed in a chill counter and reheated in a microwave. We had a couple of mutton rolls (70p apiece), which weren't as good as we've had elsewhere (Martin thought the ones at Adchaya down the road were better), but weren't bad, quite tasty. Sadly, they'd run out of the fish and egg rolls (65p apiece) that we'd hoped to try.

We also tried some devilled prawns (£4), which were freshly cooked — the sauce was very good, if not all that hot, and the prawns were fairly big and meaty and cooked just right.

Moving on to mains, the mutton string hopper kotthu (£4.25) was pretty good. It wasn't obvious from the menu whether it came with curry sauce/bone sauce, and it turned out that it didn't. Mutton curry (£3.50) was OK; bob thought the mutton was a bit dry, and there wasn't really enough sauce. It also included quite large chunks of onion, though this did work fine in context. Mixed vegetable curry (£1.50) had quite a nice sauce, coconutty and gently spiced, though the actual vegetables were a bit frozen-mixed-vegetable (peas and diced carrots).

Our rice was served with two poppadoms on top — we're not quite sure why. The poppadoms were quite nice, though.

They didn't offer us any options for the spicing levels. The chilli heat was fine for us (we do have quite high chilli tolerances), but bob did wonder if they'd toned it down for us a bit.

Like the starters, the desserts were displayed in the chill counters; there were some interesting-looking cubes of jelly on display, but we didn't try any.

bob's verdict: Probably not worth the walk from the Trafalgar, since Watch Me and Adchaya are closer, and Watch Me at least is somewhat better.