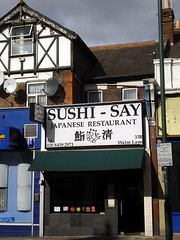 It has a proper sushi counter at the front with seating for about a dozen people, as well as normal chairs and tables for another twenty or so further back, and a small semi-private room at the rear. As well as being small, it's popular, and booking is recommended.

Kake and Ewan visited on a Thursday evening in October 2009. We hadn't booked, and when we arrived a little after 7pm the place was pretty full. They initially said they wouldn't be able to fit us in, but when we offered to come back later they relented and found us a space. This wasn't just them being awkward — by the time we finished our meal there were people queuing up for a table.

The menu is quite large, so to avoid faffing we decided to go for the sushi set menu. We also ordered a bottle of white wine and later on a flask of sake, which was presented in a cunning little flask that had a separate compartment for the ice photo.

First up was a small taster of spinach in a sweet miso sauce photo; simple but well-executed. Next was a dish of simmered vegetables and (I think) snow-dried tofu photo; well-flavoured and with a good mix of textures.

This was followed by yakitori photo and then the main event, a selection of sushi photo; seven pieces of nigiri and three of cucumber maki. Pleasingly, the cucumber in the maki was cut into fine strips, which not only looked pretty but gave a more integrated result. The fish pieces on the nigiri were huge — perhaps a little too huge for Kake's preference, with the omelette nigiri requiring three bites. The fish was all fresh and well-cut, and the chef clearly wasn't afraid to use the wasabi (though this wasn't overdone, and our waitress had checked in advance that we were able to handle it). This course also included a very pleasant clear soup photo. Finally, a small fruit plate arrived shortly before the bill (which we didn't ask for; it just came).

Kake's verdict: I'll definitely come back, though this is partly because the journey is a fairly simple one for me. I'll aim for earlier in the week next time so I have a chance of sitting at the sushi bar and interacting with the chef — hopefully this might lead to more manageably-sized nigiri.