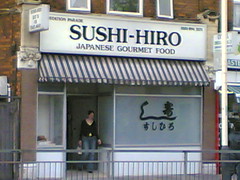 According to a comment on Chowhound and a blog post on Eat Drink Sleep Shop Love, as of September 2010 the premises have been taken over by Atari-Ya.

It's very good and not all that expensive. The decor and service are basic — the focus is on the food. The only hot food available is miso soup; it's nigiri and sashimi all the way. eGullet says they use real wasabi, something of a rarity.

From the outside it often looks closed as well as uninviting, but inside it's bright with a bar and tables. There is also a waiting area for takeaway orderers. They do a good range of nigiri, sashimi and rolls, with set meals costing up to £18, sashimi sets starting at £7 and rolls and nigiri starting at £1 (prices as of July 2009). Ordering is similar to dim sum restaurants, with a menu photo that you write on the quantity of each item that you want. The fish is fresh and the food very tasty photo of the delux nigiri set. They have all the standard fish that you see in most places as well as occasional rarities such as geoduck and abalone (not available when Billy last visited, but on the menu) as well as toro.

On the drinks menu they have some different sakes, a couple of beers and tea (which is plentiful and nice). They bring you complimentary edamame to go with your drinks.

Service is friendly and the place is normally busy. However they do reserve tables if you want to make sure that you get in.

On Billy's July 2009 visit, they only accepted cash (as pointed out by a sign in the window, their menu and their staff), and although there is a cash machine outside, it's often not working. However, Krista of Londonelicious (linked below) reports that as of June 2010 they do now take cards.

Note that they close early, at 9pm, and they're not open at all on Mondays.

Comment added by diroussel: It is very good sushi, we go all the time. Best sushi I've had in London I think.