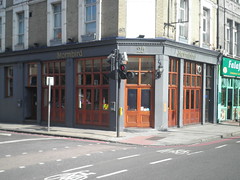 While the Stormbird claims to be a pub, the feel, at least on the Friday evening when DrHyde visited, was more that of a bar, although unlike most bars it has a huge range of beers both on founts and on four hand pumps, a range which apparently constantly changes.

DrHyde and cronies had a Brooklyn Lager (which appears to be a fixture, given that they have a neon sign advertising it in the window), Thornbridge Jaipur IPA, Brouwerij Boon Kriek, a coffee stout, and London-brewed Brodie's IPA. Other local beers on at the time were from the Kernel brewery and, from Brighton, a few different brews from Dark Star. There were also bottled beers.

DrHyde's verdict: While it is more of a bar than a pub, this should not be taken as a criticism. Bars can be great places. They're just different. You wouldn't go here for a whole evening, but it makes a great place to meet up for a drink before heading to one of the good restaurants in the area.