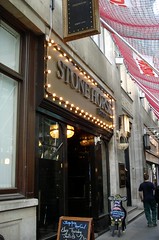 Stone Horse Paper Cow was a subterranean bar/pub just off Bishopsgate near Liverpool Street Station, part of the Antic chain. However, it has now closed. As of May 2011 the premises remain empty.

This used to be simply the Stone Horse, but was taken over and renovated by Antic, and reopened at the start of 2009 under the new name. The actual pub is in the basement; while there are a few tables at ground level, the bar is down a flight of stairs, along with most of the seating.

As with the other Antic pubs, the decor is determinedly quirky, with mismatched lampshades, exposed floorboards, sofa areas that look like they're taken straight from someone's living room, and a birdcage full of fairy lights and peacock feathers hanging by the bar. Being in a basement, there's no natural light, and the lighting is kept dim. The mostly standing-only area by the bar photo opens out further back into a more spacious part with booths, a pool table, and a table football table.

Kake and friends visited on a Thursday afternoon in May 2009. Three real ales were available; Purity UBU, Purity Pure Gold (£1.50/half), and Timothy Taylor Landlord.

Although we were the only people in apart from the staff, it was quite difficult to have a conversation as the music was turned up rather loud. One suspects it gets even more difficult when the post-work rush is on.

They do food, but we didn't try it. Photo of blackboard with selection of menu. According to the Antic website as of May 2009, food is served noon-8pm every day (note it's closed on Sundays).

A sign seen in May 2009 advertised a quiz night every other Monday, entry £2 per person and a maximum of six people per team.

Accessibility: A step up to get into the top part. The bar and almost all of the seating is in the basement, down a flight of stairs with a bend in the middle. The toilets are up a few more steps from the main basement area.