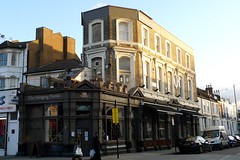 The Stinging Nettle was a Young's pub near Goldhawk Road Station. It closed some time around the end of 2011/beginning of 2012.

As of January 2012, it was reported that Young's had sold the freehold to a property development company who plan to convert the premises for residential use and "for alternative commercial use and investment". The Feb/Mar 2013 issue of London Drinker magazine reports further that the ground floor has been converted to a branch of Costa Coffee.

The place has been refurbished from its previous incarnation as an Australian bar called the Bush Ranger, though the vibe and the clientele remain largely similar, and it's better than some other chain bars in the area. It now fits into the increasingly familiar template that Young's has rolled out for many of its urban pubs, with the gastro-style makeover, chandeliers and flock wallpaper.

Seating downstairs is along the relatively narrow space opposite the bar, with a selection of high tables, as well as some lower seating near the front door. There's a larger room upstairs, however, which has more space and is generally quieter.

There are some handpulls at the bar featuring Young's ordinary and Kew, amongst other familiars. Draught lagers include Peroni and Pilsner Urquell, and they also have a wine list. The house red was fairly poor quality on Ewan's visit, though a merlot (their most expensive wine, around £6.50 for a large 250ml glass) was more drinkable.