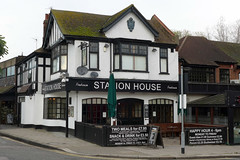 The Station House was a pub opposite Chingford Station. It closed down by November 2018, and the premises were later taken over by another pub business called the Rusty Bike.

It's fairly basic inside; a large low-ceilinged room with fairly widely-spaced chairs and tables. The floor is carpeted, aside from a line of flagstones curving around the bar, and the space is broken up with pillars. Posters around the walls advertise various food and drink deals.

Kake first visited on a Tuesday evening in September 2011. There were quite a few people in when I arrived around 7pm, though still plenty of tables free. No music was playing. When I got there, the flatscreens were showing a sport channel with the sound either off or very low, but as the time of that evening's football match (England v Wales Euro 2012 qualifier) approached, the sound was turned up loud and the volume of conversation rose with it.

All four handpumps were on, though one ran out during my visit; the three survivors were Red Squirrel London Porter (£2.90/pint), Brakspear Oxford Gold, and Marston's Pedigree. A commenter called Nick W (November 2011) tells us that they have a policy of cleaning the ale lines between every cask.

Kake visited again on a Thursday afternoon in September 2017. There were about a dozen other customers at 3:30pm, some seemingly regulars. Magic FM was playing, not too loud. The handpumps were clipped for four real ales and one real cider: Banks's Mild (£1.50/half), Ringwood Forty Niner, Marston's Pedigree, Cotleigh Uncle Sam, and Original Somerset Cider Co Amber Apple Jack.

As of September 2011, food is served noon-3pm and 5pm-8pm Mon-Fri, noon-6pm Sat, and noon-4pm Sun. Kake tried the five-bean chilli (£4.75 including tortilla chips, sour cream, and a choice of rice or chips) photo. It was OK. There wasn't much flavour in it other than chilli heat, and the beans were inconsistently cooked, some under and some over.

Accessibility: There are steps at the front entrance, but the side entrance has no steps. Once you're in, it's step-free to the bar, most if not all of the seating, and a RADAR-locked accessible toilet. Other toilets are up a flight of stairs with a u-turn in the middle and a sturdy handrail on both sides.