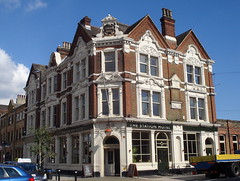 It's housed in a grand building very close to Hither Green Station. A bas-relief on the exterior notes that it was constructed in 1906.

Entry is into a bright, airy space with some lovely tiling leading up to the bar. Seating is placed around the walls, with plenty of room left for standing around the bar. Shelves of books and curios are used to break up the space and act as privacy screens. The floor is varnished boards and the walls are shades of cream and light green. Huge lampshades hang above the bar, perhaps compensating for the lack of gantry. A spacious area to the side of the bar is provided for dining.

Up a couple of steps at one end is a more secluded area with high stool seating plus a couple of long tables to seat groups of eight or so. Decor is modern and clean but not sparse. A nod to the name and location of the pub is provided by railway-related images on the walls.

Kake visited on a Friday afternoon in September 2014. There were two or three other customers in at 2:30pm. Funky music was playing, not too loud (except at the end of the room right by the speakers).

Eight or nine of the eleven handpumps were on, clipped for Westons Raspberry Twist plus ales including Dark Star Art of Darkness, Castle Rock Harvest Pale, St Austell Tribute, and Marston's Pedigree New World. A half of lime and soda was £1.20.

According to menus seen in September 2014, the main menu photo is served noon-3pm and 6pm-10pm Mon-Fri and all day Saturday, while the "all day menu" photo of sandwiches, pizzas, and sharing boards is unsurprisingly served all day. They also do Sunday roasts. According to their website as of September 2014, nearly all of their dishes can be made gluten free on request, even the sandwiches and pizzas.

Accessibility: No steps to get in, to the bar, or to most of the seating. Also no steps to the toilets, including an accessible one, plus the ladies' has a cubicle with a door that opens outwards.