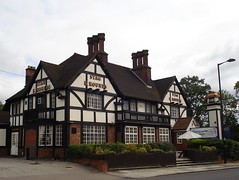 It's a fairly standard Ember Inn, with the ambience of a mid-range corporate hotel bar. Seating is a mix of high chairs and tables and normal-height ones, and the furniture is carefully chosen to blend in without all looking samey. Although the space is fairly large, it's broken up into a number of different tucked-away areas, giving some privacy. Logs of wood sit stacked incongruously in glass-shelved display cabinets, along with large unlit candles and decorative cushions.

There's a reasonably-sized beer garden out the back, not under cover itself but incorporating a covered standing-up-only smokers' shelter. Three additional triangular picnic tables sit on a patio out the front.

Kake visited on a Wednesday lunchtime in September 2013. When the pub opened at noon, there were three customers including me, and others arrived shortly afterwards; by the time I left a little before 1pm there were quite a few people in. Music was playing, not too loud, Frank Sinatra and the like. Service was cheerful and friendly.

The handpumps on the bar were clipped for Purity Brewing Company Warlord IPA, Woodforde Wherry, Wychwood Hobgoblin, and Adnams Broadside. A pint of lime and soda was 50p.

Food is served all day from a standard Ember Inns menu. Kake's flatbread pizza with slow-cooked barbecue pulled pork (£6.75) photo was a little disappointing; the tomato sauce was too sharp, while the pulled pork was so sweet that all the flavour of the meat was masked. The "pizza" was too floppy to eat with one's fingers, and difficult to cut with the blunt knife provided. It was served on a chopping board that was too small for it, with a square of greaseproof paper between pizza and board to make it even harder to cut.

Child-friendliness: They have at least three highchairs, the type without trays. As of September 2013 a sign states that "Families with young guests are welcome to enjoy a main meal with us", suggesting that children are only allowed in if eating.

Accessibility: Steps at the front of the patio, but there's a ramp to the side by the car park. Step-free to the bar, seating, and toilets (including an accessible one). Not sure about steps to beer garden. Some of the seating is on high stools, but there's plenty of normal-height seating too.