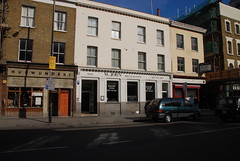 The Shoreditch branch of St John, specialising in off sales of bread and wine, as well as a St John style traditional British menu, breakfasts and elevenses. The menu changes daily, with some options appearing more often than others.

During the week they open at 9am for breakfast, switch to elevenses at 11am, and have the full menu available from midday, with occasional extra items appearing from 1pm. Service can be a bit slow when they open, but this seems to be due to them cooking everything fresh. Bread is baked on the premises and is available to takeaway.

Breakfast always has a bacon sandwich on the menu (£5.40 as of August 2010), with big homemade bread, lots of good bacon, and homemade ketchup. Other options as of September 2007 consist of a variety of traditional breakfast foods including eggy bread and pikelets, with prices ranging from £2.50 for bread and honey up to £6ish for kippers. Note that the hot options may run out as the morning goes on; when James visited in August 2010, the only hot option left half an hour before the end of breakfast service was the bacon sandwich. Their coffee is Illy, and it's all rather good. Breakfast can fill up, but booking isn't always necessary — it is possible though.

Similarly, you can normally get a table for lunch, although booking is recommended later in the week. The menu is made up of mainly smaller dishes that they recommend are ordered about two per person, and the menu varies each day. Prices as of September 2009 start at about £5 per plate, going up to £10-15 for full main dishes. The food does follow the normal "Nose to Tail" eating idea, so expect crispy pigs ears and spleens alongside roast fowl, soups and vegetable dishes. They have a fairly big dessert menu, almost always including their famous Eccles cakes served with Lancashire cheese, and have Madeleines available, cooked fresh in about 15 minutes and sold by the half-dozen for £3.60.

Kat and Rick visited early on a Monday evening in November 2013, having booked earlier on that day. Four sharing plates (goat curd and greens, blood cake with duck egg, Jerusalem artichoke and red onions, pig head stew) arrived sequentially: all were delicious, especially the stew, though we really should have asked for some more bread to mop up the sauces. These dishes, plus two puddings and two glasses of wine came to £60 excluding service (if paying by card, note that there's no automated option to add service to the bill - luckily we had enough cash for a tip). We thought this was extremely good value, given the quality of the food and service, and we will definitely return.

As the name suggests, they also do wine and have a good selection, almost all available by the glass. The wine served in the restaurant is also available to take away at the significantly lower price that you'd expect.

Accessibility: A step to get in. Toilets are down a flight of stairs, which has a handrail on one side.