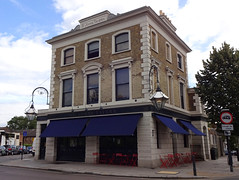 Gastropub in Archway, in the Good Beer Guide.

It's a large, high-ceilinged space, dominated by the central horseshoe bar which itself is large enough to contain a semi-open kitchen behind the bar back. Windows on three sides are partially obscured by large external shades, and what sunlight does make it in is supplemented by warm lights along the walls. The floor is varnished boards, and seating is provided by pleasingly-matching upright wooden chairs and square wooden tables for 4-6 people each.

Kake visited on a Tuesday lunchtime in September 2019. There were already five other customers when I arrived a little after their opening time of noon, and more arrived while I was there. Blues was playing, not too loud. Most of the tables were ready-set with wine glasses, napkins, cutlery, and small dishes of flaked salt and ground black pepper. The handpumps were clipped for Howling Hops Pale XX, Siren Yu Lu, Dark Star Hophead, and London Pride; a pint of lime and soda was £1.50.

When Kake visited in September 2019 they were only doing their "bar tapas" menu, due to ongoing refurbishment work, but I still found plenty I wanted to order. In the end, I went for the mackerel burger with tartare sauce and chips (£8.50) photo. Overall, it was good (though would have been better served on a plate instead of a small wooden chopping board it only just fitted on).

The mackerel was battered but not at all greasy, and I only found one tiny bone; it was a little dry in places though. The tartare sauce was good, and seemed to be house-made, but I wished for a little extra on the side to go with the ends of the fish that didn't fit in the bun. The skin-on chips were a bit limp and greasy (though I do quite like that style), and there were also quite a lot of small scrappy bits; it wasn't clear whether either of these things were on purpose.

Service was a little odd, and I actually felt I was treated quite rudely in comparison with the attention lavished on other customers. The remains of my meal were still sitting uncleared as I left around 10 minutes after finishing eating, the staff were reluctant to make eye contact with me, and they ignored my thanks and goodbye when I left. In contrast, the table next to me was cleared promptly, and its inhabitants were invited to the wine tasting that was taking place that afternoon. Various people sitting at the bar were also greeted cheerfully and asked how their day was going.