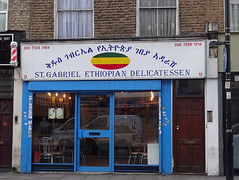 It's small and very casual, with a glass counter towards the back displaying soft drinks and a few vegetarian dishes, and a glass-fronted cabinet next to this filled with packets of grains and spices. The walls are half-panelled, painted in dark brown gloss, and Ethiopian art hangs above, some with a religious theme. The fully-glazed frontage lets in plenty of light.

Seven small dark-marble-effect melamine tables stand against the walls, with chairs clustered around them — unusually, most of the chairs are pointed towards the centre of the room rather than the tables, perhaps suggesting that a high proportion of customers are regulars who prefer to talk to each other rather than concentrating on their food.

Kake visited on a Tuesday lunchtime in November 2017. There were three other customers when I arrived a little after 1pm, and several others came in for takeaway while I was there. Music (presumably Ethiopian) was playing, not too loud, and incense was burning somewhere.

I went for the ye-tsom beya'aynetu (vegetarian selection; £8) photo, which included three lentil/split pea dishes, two cooked vegetable dishes, and a chopped salad, as well as the injera it was served on. It was all good, with distinct flavours and a mix of spicy and non-spicy dishes. I particularly liked the salad, with refreshingly juicy tomatoes and the heat of chopped green chillies. The injera was nicely sour, and was thin in the middle and thicker around the edges. Overall it was more than I could eat, but they had no problem packing up the leftovers for me to take home.

Service was a bit confusing; one of the staff members was perfectly fine, but the other was inexplicably grumpy towards me.

Kake's verdict: The stews were among the most well-flavoured Ethiopian food I've had in London. Although the strangely grumpy staff member was a bit off-putting, I'd certainly like to come back and try more of the menu.

Accessibility: A small step to get in (no more than an inch or so). No further steps to the toilet (a single unisex cubicle), though access is narrow.