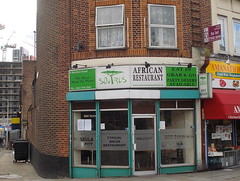 Nigerian restaurant in Canning Town, a short walk from Canning Town Station. It's part of a small chain which also has branches in Dagenham, in East Ham, in Romford, and in Lewisham.

This one is a small space, perched on a corner just off Barking Road. Seating for around 30 people is provided at oval varnished wooden tables flanked by upright chairs with slightly grubby white covers. The walls are plain, but decorated with artworks. Menus are provided on the tables, but you order and pay at the counter.

Kake visited on a Friday lunchtime in February 2017. There were three other customers when I arrived around 12:30pm, and more continued to arrive until by 1pm every table was taken. Music was playing, not too loud — Madonna and other '80s stuff which was later switched to African pop.

I went for the pounded yam with efo egusi (£9) photo. The egusi stew had a good flavour and a nice, fairly loose texture that was neither oily nor watery. Iru (fermented locust beans) were evident, adding more flavour, and there was also a decent quantity of greens. The chilli level was pretty mild. The fish was cooked quite thoroughly, as is usual in this cuisine, but not overcooked. The pounded yam had quite a loose texture too, not particularly stretchy. (This was made with yam flour; they also offer pounded yam made with fresh yam, at extra cost.)

Service was fine. They brought both a bowl of water and a knife and fork with the food, giving me the option of whether to eat with my hands or not. I asked for tap water, but instead was given a bottle of still water at no charge.

Kake's verdict: I'd come back.

Accessibility: No step in (just a small ridge), but there's a step to the toilet and the cubicles are very small.