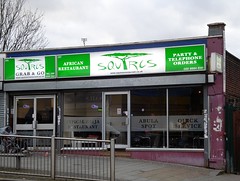 Nigerian restaurant in Dagenham, very close to Dagenham Heathway Station. It also does takeaway. It's part of a small chain which also has branches in Canning Town, in East Ham, in Romford, and in Lewisham.

It's fairly small, seating only about 30 people at cafe-style tables. Rolls of kitchen paper and plastic containers of straws sit on each table. Floor-to-ceiling windows let in plenty of light during the day.

Kake and friend visited on a Thursday lunchtime in March 2014. There were a couple of other customers in. Music was playing, not too loud, and a flatscreen was showing news with the sound on very quietly (only audible when the music stopped briefly).

Efo egusi with fish and pounded yam (£8) photo came in a generous portion, and all competently prepared. The fish was quite thoroughly cooked, but (for this style of cuisine) not over the edge into overcooked.

Moi moi (£1.50) photo was somewhat uneven in texture, as if it'd been left to sit too long before steaming. It had a good flavour, though, augmented by embedded pieces of chicken.

Kake's verdict: I'd come back if I was in the area; there's plenty more on the menu that I'd like to try.

Accessibility: Two steps to get in, one of them quite large. No further steps once you're inside. The toilet cubicle doors open outwards but there's very little space inside when the door is closed and you're sitting down — even people with short legs might have trouble fitting their knees in.