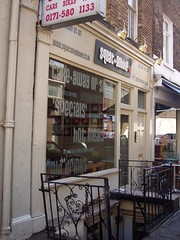 Squat and Gobble was a better-than-average cafe and takeaway spread over two sites near Goodge Street in Fitzrovia. Both branches closed in December 2010.

A smaller outlet of a cafe which has its main premises around the corner on Charlotte Street, not far from Goodge Street. The two shops do not seem to be linked internally and operate separate takeaway counters.

This branch has much less space inside, with only about 5 tables squashed in, and a couple on the pavement outside when the weather is good.

The menu and prices are identical to the larger outlet, from which the details on this entry are taken.