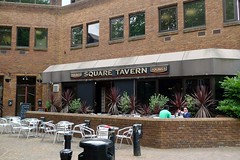 A rather hidden estate pub in Euston run by Young's, with a street entrance via a passage from Hampstead Road near the intersection with the Euston Road.

This pub was built in the late-20th century with the housing estates that surround it, and though it's clearly been refurbished since it was built, it still has the feel of a time capsule taking one back a few decades. However, despite its lack of trendiness, it's a very pleasant place which still attracts after-work office drinkers from the area as much as any local residents.

Inside is carpeted, with a large area of tables to the far side of the bar which is sometimes reserved, as well as a little area by the front windows opposite the bar with larger tables. Most drinkers crowd around the (fairly long) bar, however, and it can get busy on a Friday.

Standard Young's ales are on offer from the handpulls as well as a range of the usual draught lagers. There's a wine list and quite a few whiskies as well, chalked up on boards around the bar.