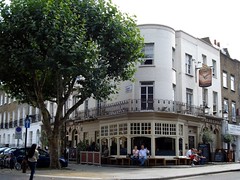 Young's pub in Camden Town, on the corner of Parkway and Albert Street. It's changed management a few times in recent years, but as of 2008 is run by Emily and Jon Moran, with Emily in charge of the kitchen and Jon running the bar.

Kake visited on a Thursday afternoon/evening in September 2008. I arrived a little after 5pm, and there were a number of tables free, though it was quite full by 7pm and by the time I left around 8pm most seats were taken. Piped music was playing throughout my visit; it was actually quite decent and not overly loud. Even on Ewan's Wednesday evening visit, it was quite full by mid-evening, though seating is comfortable. There's a large bright room by the street-side windows which fills up first, though tables are also to be found near the bar and the door,

The bar has an impressive range of six handpumps. Ales available on my visit were Young's Bitter, Young's Special, and Bombardier, and the bar staff told me that St Austell Tribute was coming on the next day for Talk Like A Pirate Day. The Young's Bitter was £2.65/pint, and tasted good and fresh. They also have a range of draught lagers, including Peroni, Staropramen and Leffe.

According to the Young's website, as of September 2008 food is served all day, noon-10pm Mon-Sun.

As well as a more standard menu of starters, mains, sides, and puddings, they also have a "create a sharing plate" menu, from which you can choose items at £5 apiece or three for £13.50 PDF menu on Young's website. After being reassured by the bar staff that three items wouldn't be excessive for one hungry person, I chose chicken and coriander skewers, crispy chilli squid, and porcini mushroom ravioli photo. There was quite a lot of it, and it actually defeated me, though bob or doop wouldn't have had a problem.

It wasn't bad at all for pub food, though I do feel the porcini mushroom ravioli were slightly misadvertised (they were actually cheese tortellini in a mushroom sauce), and the crispy chilli squid would have been much better (and crispier) if it hadn't come swimming in a pool of bottled sweet chilli sauce. I do really like the concept of this menu though, and would order from it again.

Accessibility: One step up to get in at both entrances, and toilets are down a flight of stairs.