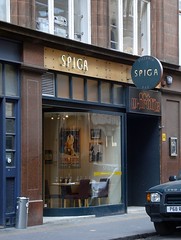 Spiga was an Italian restaurant in Soho. It closed some time in 2009, and as of mid-2009 the premises are occupied by a gay bar called Profile Bar.

Spiga is a modern Italian restaurant in Soho. It's not like the place in Ashes to Ashes but it's not uber-cool contemporary either.

Greg visited on a Tuesday evening in May 2008. The service was excellent, a white haired man in his 30s or 40s, who I'm guessing was the Maitre D' or whatever the Italian equivalent is, couldn't do enough - it reminded me of American up market standards of service and care.

The food was fresh and excellent, we had just popped in for a quick bite so I've only tried the main courses. My wife had a lovely seared piece of tuna with a really fresh salad-ish accompaniment (great tomatoes), I can't be more specific as I was busy on my dish. A lovely gnocchi with spinach and spud, served with a sauce bursting with life and some nice bits of fried/grilled Italian ham. It was delicious.

The only problem was I was a little full having ate earlier, so I took a chance and opted to do the American thing - asking for the remainer to go, it was that good my typical British reservations were overcome and the same gentleman (the rest of the staff were excellent as well) was happy to deal with the request.