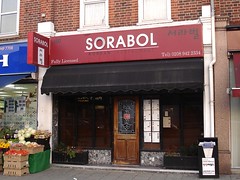 Of New Malden's several Korean restaurants and cafes, Sorabol is on the more upmarket side of the scale, being definitely a restaurant rather than a cafe. They also have facilities for tabletop barbecue.

Kake, Sarah, and Jo visited on a Thursday evening in February 2011. We hadn't booked, but there was no problem finding us a table.

Since Jo is vegetarian, we were pleased to find that the menu had several dishes marked as having a vegetarian option available. Our waitress was careful to make sure we knew which these were, and also steered us away from dishes that she said were "not really Korean", such as vegetable bokum (stirfried vegetables).

To start, we ordered some banchan (small shared side dishes, usually cold) — mixed kimchi and mixed namul (seasoned vegetables). We were also brought a few other banchan for free (standard practice in Korea, but doesn't always happen in London), including a cold mashed potato salad (surprisingly nice) and fried soya beans.

Japchae (£7.90), ordered in a vegetarian version, was good, with plenty of flavour and a nice texture to the noodles. Kimchi chige (spicy kimchi and pork soup; £7) had less actual meat in it than we were expecting. Kimchi bokum bap (kimchi fried rice; £6.50) was fine.

Service was friendly and helpful throughout.