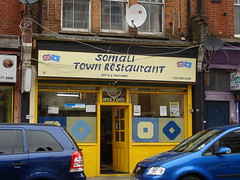 Somali cafe/restaurant in Streatham. They also do takeaway.

It's quite small, seating only about 30 people on padded seats at wood-effect melamine-topped tables. The decor is plain and cafe-style, with the only ornamentation being the wavy-edged mirrors on the walls and the decorative decals on windows and door. Huge plastic jugs of tap water sit ready on the tables.

Kake has visited twice now, most recently in November 2018. On a Thursday lunchtime in August 2016, there were half a dozen other customers when I arrived around 12:30pm, and more like 14 or 15 by 12:45. On a Monday morning in November 2018, there were three other customers when I arrived around 8:15am, and a few more came in and out for takeaway coffees while I was there. On both occasions, there was no music playing, but there was plenty of lively conversation; also, all the customers apart from me were men, but nobody seemed to mind me being there.

On my lunchtime visit, soup and salad were put on the table as I sat down, both included in the price of my meal. There's no actual menu, but I was told the options included beef steak, chopped meat, fish, rice, and spaghetti. I went for fish with rice (£7 in Aug 2016) photo.

The fish, which turned out to be salmon, was cooked a little more than I like, though this is just personal preference. There were no bones in it, and the portion was generous. The accompanying stewed potatoes and carrots were very soft, but this worked well in context. The rice was fine, and again a generous portion.

The soup was simple, but very good, with a deeply savoury flavour and just the right amount of lemon juice. The green chilli sauce provided in a squeeze bottle perked it up even further.

On my breakfast visit, I asked for anjero and inquired what they had to go with it; they suggested kidneys, but when I asked if they had fuul (beans) they said they'd give me spinach, fuul, and chicken all on the same plate photo, which sounded good so I agreed. A cup of tea was also included, for a total of £5 (in Nov 2018).

The spinach was cooked very soft, but this worked well in context. The fuul was fine albeit nothing special. The chicken was cooked with onions and fresh coriander, had more flavour than I usually expect from chicken, and was again a generous portion; I only managed about half of it. Overall, it was a nicely balanced plate, but I wish it had been heated a bit more, as it got cold quite quickly.

The anjero was a generous portion of three, but unfortunately two of them were somewhat burnt, giving them a bitter flavour. The tea came in a tall glass, pre-milked but not pre-sugared.

Accessibility: A small step to get in. Another small step and a tight turn to the toilet, which is a single cramped unisex cubicle.