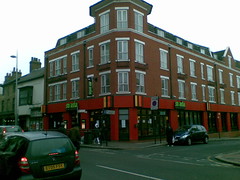 Now closed; was an Asian buffet in Acton. As of early 2012, the premises have been taken over by a small Lebanese restaurant chain called Woody Grill.

The information below is retained for people who want to know what it was like as So Asia.

bob visited on a Wednesday lunchtime in January 2009. At 12:15 I was the first customer but it filled up while I was there. The restaurant is an ex Puzzle Pub so is quite large. It can seat over 60 people.

The all you can eat buffet is £6 at lunchtimes. All the food was fresh and tasty, but the potatoes in the aloo jeera were a touch undercooked. There was quite a selection; nothing great but it was all good. Although they did overestimate the spiciness of things in my opinion. I like it hot, but the things that were meant to be spicy had no discernable spice in them at all even when I ate the chillies.

Chinese tea is £1.50 for up to two people 50p extra for additional people

Accessibility: Step-free to get in, but the toilets are down a flight of stairs.