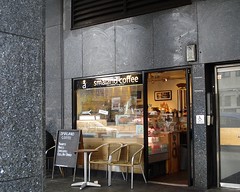 Smaland Coffee was a tiny coffee/sandwich shop very near Waterloo Station. According to Google Street View, it closed down some time between June 2012 and May 2014.

It's mostly focused on takeaway, but there are two small tables and four chairs outside, well sheltered under the concrete canopy of the offices above. Inside, there's room for one or two people to queue up for coffees and other hot drinks, and pre-made sandwiches, bagels, and wraps from the display counter.

Kake visited on a Tuesday late lunchtime in October 2009. When I arrived around 2pm, all the interesting-sounding sandwiches listed on their website had already gone, so I was left to choose from the rather less interesting bagel selection. I went for the LAX, with smoked salmon, light cream cheese, fresh dill, and lemon juice (£3.20). It was OK without being anything special; the bagel was a bit boring, and the filling-to-bagel ratio was quite low. I did like the use of fresh dill, though.

Do note that the person who recommended this place to me did so on the basis of its coffee, so coming here and not having coffee is almost certainly missing the point. I wasn't in a coffee mood, though.

Accessibility: No step to get in, but the shop is really minuscule.