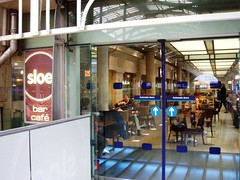 Sloe Bar Cafe was a bar and cafe in Paddington Station. It has now closed. As of early 2017 the premises are occupied by another bar called Cabin.

A bar and cafe in Paddington Station.

There's nothing particularly special about this place, but then most bars and cafes in stations suffer the same problems. There's plenty of seating inside around the bar, as well as tables out on the patio overlooking the station platforms and shops.

Orders for food and drinks are taken at the bar, and brought to your table. The menu is fairly basic, with a range of pizzas (around £6) and some burgers, as well as panini which they label 'ciampini', though they are much the same. Quality is fine, and they are served with a small amount of salad, which at least is fresh.

On Ewan's April 2008 visit, the bar had no real ale, but it did have the usual lagers as well as Hoegaarden and Staropramen, and an extensive range of spirits too. According to a commenter on this page (September 2011), they do now sell ales, though we have no details as to what the selection is like.

Accessibility: The entrance is up a single escalator from opposite the platforms, though there's no down escalator, so you have to go down a staircase to get back to the platform level. According to the abovementioned commenter, there's also a lift for step-free access, though we haven't verified this.