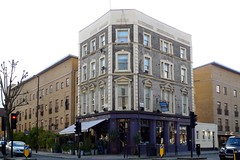 Now closed; was an "unbranded" (Castle) Mitchells & Butlers pub not too far from Westbourne Park Station. As of early 2011 the premises are occupied by a Faucet Inns pub called the Red Squirrel.

A Mitchells & Butlers pub, part of their "unbranded" Castle sub-chain, just north of the canal not too far from Westbourne Park Station.

A community local of the past, this place has been attractively restored to some kind of former glory, with some nice work done to preserve the Victorian interiors, bare wood floors and large, solid tables. There are two rooms, on either side of the central bar, with tables set for dining, but not too obtrusively; it's fine to visit for just a drink. There is also some seating in a little sheltered outdoors area alongside the road.

There are three handpulls for ale, dispensing Landlord (£3.10/pint), Young's ordinary and Rocking Rudolph, on a January 2010 visit. They also have Staropramen, Leffe and other lagers on draught.

The food menu is standard for this chain and served all day.

Music is playing, but not too loudly.