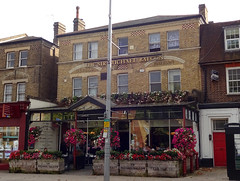 It's named after the film producer Michael Balcon, who ran Ealing Studios during the time of the Ealing Comedies.

It's a fairly standard Wetherspoons, though perhaps a little less dingy than some. It has a covered patio out the front.

There were quite a lot of people in, but a few free tables. Service was very friendly.

Like all Wetherspoons, food is served all day from a standard menu. We had some chips (£2.20 for a generous and well-executed portion) and some nachos, which we noted were the most neatly-arranged nachos we'd ever seen in a Wetherspoons.

Accessibility: No steps to get in. Step-free to the bar and much of the seating once you're in, though some seats are up on a dais. The toilets are up a flight of stairs with a bend and a handrail only part of the way on one side (though there's a small dado rail that might be usable to hold on to the rest of the way). There are doors at the back marked "disabled only" that might lead to an accessible toilet, but we didn't check this.