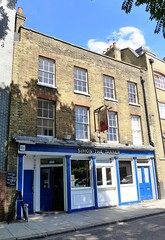 A pub on Long Lane in Bermondsey. It reopened in early 2011 after many years of closure, and is now run by the same people as the Queen's Head in King's Cross.

bob visited early on a Friday evening in March 2011, shortly after the reopening. Breconshire Brewery 6 (£3/pint) and Adnam's Lighthouse (£3.20/pint) were both very drinkable. They also had bottles of Kernel Brewery beers in the fridge.

Acording to a comment from the new owners on the LondonSE1 thread linked below, as of March 2011 food is served noon-11pm every day.

According to another comment on LondonSE1, as of July 2011 there's a quiz night every Tuesday from 8pm.

Accessibility: A step to get in, but level access to toilets once you're in. The women's toilet doubles as an accessible one.