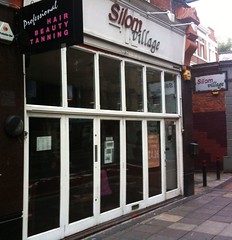 Silom Village was a Thai restaurant at the east end of Ealing Broadway. It has now closed. As of September 2017 the premises are occupied by a different Thai restaurant called Saneh Thai photo.

Thai restaurant at the east end of Ealing Broadway. They do a good range of Thai food for a reasonable price.

As of September 2009, prices for mains start at about £6 and include a good range of curries, meat, veg and noodle dishes. They explicitly say that they can switch out the meat in almost any dish for tofu or vegetables at request. They also do a range of starters including a pretty good Tom Yum Goong.

They do a 'Lunch Express' menu, available every day from 12-6pm, which includes a variety of mains with plain rice for about £5, with coconut or fried rice 50p extra.

Billy most recently visited in September 2009. I was impressed by the tastiness of the hot and sour soup, with a nice spiciness that built while I ate it rather than removing the top of my head on the first spoonful, and also by the quality and portion size of the Lunch Express massaman curry.