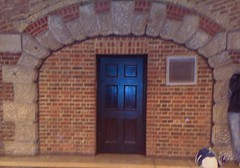 Shunt is an artists' collective putting on performances in interesting venues. Shunt Vaults was their home from 2006 until June 2010, when the venue was closed for work connected with the redevelopment of London Bridge Station.

The information below is retained for people who want to know what Shunt Vaults was like before it was closed.

Shunt is an artists' collective putting on performances in interesting venues. Shunt Vaults has been their home since 2006 — it is a former bonded warehouse underneath London Bridge Station and is a beautiful and massive space full of tunnels and arches. Entrance is via an unmarked door (see this photo for details) from Joiner Street which is a covered pedestrianised "road" which runs through London Bridge Station. After going through this door, you follow the ramps down to the main part of the vaults.

Although it was announced in 2009 that Shunt Vaults would have to close due to the redevelopment of London Bridge Station, as of February 2010 they have been granted another year's leeway.

Shunt Vaults is home to the Shunt Lounge which is a members' bar with access for non members available for £5 on Wednesdays and Thursdays, and £10 on Fridays and Saturdays. Membership is sold in limited periods for a few months at a time.

There is generally something going on every time the building is open — from theatre to performance art to exhibitions and installations. Weeks are generally curated in themes with multiple things going on at the same time.

secretlondon attended an event there in 2008 (£5 entry). There were random things going on all over including film projected on one wall, a woman covering herself in green paint, and an exhibition of old pinball machines. There was a bar with reasonably priced drinks.

Warning: They have been made to implement a policy of requiring ID and taking your photograph before allowing entry. Their website says it is a requirement of the Metropolitan Police and Southwark's licencing committee that you bring photo ID which they have to scan. They claim that all information is password protected and will be deleted after 28 days, will not be shared with any other agency and is only for security alerts in the station or in the vaults. (We don't know if this claim is true, nor how secure their passwords are, nor if they would actually be allowed to keep the information from the police if they asked for it.)