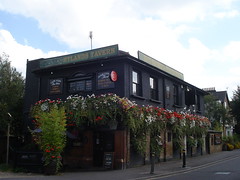 It's a nice space inside, with mismatched upholstered wooden chairs standing upright around large wooden tables of various shapes and sizes. It's all been opened up around the bar, but the space is broken up with etched glass and stained glass privacy screens. The traditional patterned pub carpet on the floor is offset by the plain cream paintwork, giving a feel of lightness and openness photo. Condiments are arranged on an old-fashioned sideboard at one end, and standard lamps are placed here and there.

Mirrors advertising Chivas Regal, Usher's India Pale Ale and Schweppes mineral waters hang on the walls. A pinball table (sadly out of commission on our visit) sits next to a dartboard in one corner, and a piano stands against the wall. More stained glass surrounds the door leading out to the extensive and beflowered patio garden.

Kake visited on a Monday afternoon in September 2014. Other customers came and went during my visit, but there were always at least half a dozen, with most people choosing to sit in the beer garden. Music was playing, fairly chilled, not too loud.

There are twelve handpumps on the bar, but half of them were clearly out of regular use; none of them had pump clips, and instead they had charity collection boxes fastened to them. Three of the other six were on, offering Kent Black Gold, Westons Country Perry, and St Austell Tribute. A pint of lime and soda was £1.

According to a newsletter seen in September 2014, there's live music every Sunday evening, an acoustic night on the first Thursday of the month, and a quiz every Wednesday.

The 2015 Good Beer Guide says the upstairs room is available for booking.

Accessibility: A small step to get in (no more than 2 inches). The bar, most of the ground-floor seating, and the toilets (including an accessible one) are on the same level. A step to the start of the beer garden, and another step to most of the seating out there.