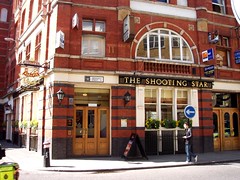 The Shooting Star was a Fuller's Ale and Pie House near Liverpool Street Station. It closed in 2016, but Fuller's retained the building and reopened there in July 2016 in a different form under the name of The Astronomer.

Fuller's Ale and Pie House near Liverpool Street Station. Note that it's closed on weekends, like most City pubs.

Kake first visited on a Thursday evening in September 2007. It was quite quiet for a pub so close to a mainline station, but in a good way (no struggle for a table, but not echoingly empty). The good weather probably helped though, as there were a number of people standing outside. The music was extremely cheesy - and not in a good way - and loud enough to slightly impede conversation.

pfig visited again a week later; the music was very good this time, and not too loud, unlike the previous week. It was mostly indie pop and electronica, quite a good selection of both. The beers drunk on this occasion were: Grolsch (very good, but then again that's easy); Discovery, which was a bit of a let down as it was plainly flat and too warm; and London Pride and (bottled) London Porter, which were excellent. I drank mostly Bitburger Drive, which I think is the best of the alcohol-free beer-like beverages, managing not to taste of chemicals but instead like a light lager. I'm mentioning it because it's becoming more difficult to find.

Good food is served all day (until 9pm, according to the 2008 Good Beer Guide). It's not cheap, but that's fairly standard for the area. They offer a varied and interesting regular menu as well as frequently-changing specials. Only a few vegetarian choices, but they've all had some thought put into them.

Lumberjack chips (£2.75), sampled in September 2007, were to Kake's taste but not Martin's, and gained points for having the skin left on but lost them again for being pre-salted photo. Food sampled by pfig and friends a week later was: warm goat's cheese & pomegranate salad (3/5); game, port & plum pie (5/5); chicken, ham & spinach pie (4/5); and the vegetarian winter herb garden pie (4/5).

We tried a couple of dishes from the specials menu on our latest visit (January 2008). Greg had the sausage toad (a large Yorkshire pudding filled with mash, sausages, and gravy); he rated it quite highly, and it was a very generous portion photo, while Kake's mushroom, blue cheese, and hazelnut parcel (£9.25) was quite excellent photo.

Other examples from the regular menu include soup of the day £4; brie, grape, and celery sandwich £4.75; nachos £6; sausage and mash (veggie option available) £8.75; lemon chicken and courgette salad £9.25; steak and ESB pie £8.50. They also offer sharing plates for two (from 5pm-9pm), including a pie tasting plate at £16. (Photos of the menu as of September 2007 are available here.)

Accessibility: Although there are three steps up to get into the pub, they have made an effort to overcome this problem by putting in a lift to get wheelchairs etc up from street level, and there is a disabled loo. Once you're in the pub, it's all on one level.

They have a bookable function room, with a big screen. The function room is downstairs near the toilets. Unfortunately, as of January 2009, they're asking for a £100 deposit for use of the function room. They will also reserve space in the main pub, and there's an area up a few steps past the end of the bar which was reserved on an October 2009 visit (they allowed us to sit there erroneously, but were gracious in finding us another table in the busy pub for relocating to when the bar staff realised their error).