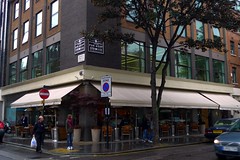 A basement bar under Roka restaurant on Charlotte Street in Fitzrovia.

The entrance is directly to some steps next to the restaurant, leading down to a dimly but effectively lit room. Walls are softly clad in tactile fabrics photo, and seating is on leather stools on several levels in what is essentially a large square space, though broken up by partitions. The bar itself is in the middle of the room. Waiting staff attend to you when you arrive, and on Ewan's visit they awkwardly ushered us away from one area (presumably booked for later in the evening), though were otherwise perfectly friendly.

The cocktail range is based primarily on the shochu of the bar's name, a delicately-infused spirit which is made on the premises (you can even purchase your own personal jar to drink from whenever you visit). There are a variety of shochu 'tonics' photo of menu, as well as shochu on its own or in cocktails photo of menu. A range of other cocktails is also given photo of menu. Most cocktails come in around the £8-£10 price.

Ewan tried the Nightingale shochu-based cocktail (£8.30) photo, featuring shiso shu, elderflower, lime and bitters, which was rather nice and served in a martini glass. Sarah's more simple jasmine shu 'tonic' (£6.90) photo promised "feelings of optimism and euphoria", bold claims followed by the other tonics listed on the menu. Next up, the smoked Old Fashioned (£8.90) photo comprised whisky, "smoked and tobacco sugar syrup" and angostura bitters: quite apart from the slightly stilted phrasing of the menu, the smokiness was subtle, but it was a very solid Old Fashioned, helped immensely by the rough-hewn chunk of ice in the glass. Sarah finished with a refreshing Hazumi Yuki cocktail (£8.30) photo.

Lunch is served noon-3:30pm Tuesday to Friday, and dinner from 5:30pm-11:30pm Monday to Saturday and 6pm-10:30pm on Sunday. Food comes from the same menu as the upstairs restaurant photo of Roka menu in June 2009. Our visit was on a Friday afternoon, so we were only able to try the Japanese rice crackers (£3), which came in a good sized bowl and were all good quality and rather tasty, a good range of textures and flavours.

Although it was a Friday afternoon, there were a few other people there, though I imagine most of their trade comes later in the evening.