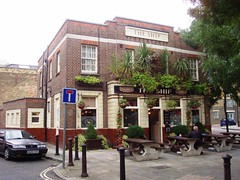 Young's pub in Rotherhithe, near the Brunel Museum and Rotherhithe Station.

A bit of a locals' pub, with prices to match. There's some bench/table seating out the front, and some more out the back in a little beer garden (part-covered).

Kake and doop visited around 9pm on a Saturday night in November 2007. We paid £5.30 for a pint of Strongbow and a pint of bitter (we assume Young's). Real ale certainly isn't the focus here; when doop asked what beers they had, they started listing Fosters, Strongbow, etc. There were a few other customers, but it certainly wasn't busy. Some of them were sharing a pizza from a box on the bar when we arrived. Karaoke started up shortly after.

A comment on Last Rounds says it's known locally as the Ship and Handbag; no idea if this is true, or why it might be the case.