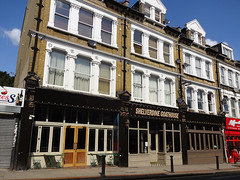 Antic pub in South Norwood, in the Good Beer Guide.

It was previously a Wetherspoons (the William Stanley), but all traces of this have now been eradicated and replaced by Antic's characteristically purposeful shabbiness. The exposed ducting, plaster, and brickwork might initially seem accidental, but they're all part of this pub chain's standard design. The usual clutter of paraphernalia is relatively restrained, however; a framed display of cutlery and tin-openers here, a shelf of old-fashioned thermos flasks there.

There are three distinct areas inside, reflecting the premises' past as three shopfronts. The central area is an open space with a table-football table, a small amount of seating, and the bar at the back. To either side of this are seating areas, each with its own look; large booths on one side, and upholstered banquettes on the other.

Kake, bob, and Toby visited on a Saturday lunchtime in September 2017. We were the first customers when we arrived at their opening time of noon, though a few others turned up while we were there. Music was playing, retro and fairly interesting.

According to their website as of September 2017, food is served 5pm-10pm Mon-Fri, noon-10pm Sat, and noon-6pm Sun. They also do bar snacks such as scotch eggs, fried pickles, and sausage rolls.

In September 2017, we tried various bar snacks, small plates ("starters") and one main. It all sounded good on the menu, and was certainly presented attractively, but the execution left something to be desired.

Fried pickles (£2.50) photo were a nice idea, but the batter was very greasy; we ordered these very soon after their opening time, and perhaps they hadn't quite got the oil up to temperature yet. Honey and mustard chipolatas (£4) (see previous photo) were OK — the sausages were fine, but the sticky glaze they were coated in added little other than sweetness, and would have been much better left off.

Pan-fried squid (£4) photo was undercooked and chewy, and the advertised sourdough was replaced by a (decent enough) non-sourdough bread. Tomato and feta tart (£3.50) photo was spoiled by being served in a huge puddle of olive oil, which soaked into the already-rich pastry and made the whole thing overwhelmingly greasy. Hummus and pitta (£4) photo was fine.

Pork chop with crushed potatoes and green beans (£13.50) photo was our only main, and perhaps the best of the lot. The pork chop was tasty, and cooked competently, though they'd clearly tried and failed to make the skin crisp. The gravy was very good, and the beans and potatoes were fine. (The tenderstem broccoli advertised on the menu was absent.)

Child-friendliness: According to a Twitter DM from a member of staff (August 2017), children are welcome every day until 10pm. There were a couple present on our September 2017 visit (one of them in our party).