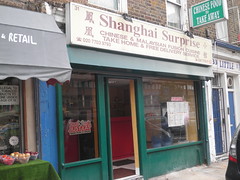 Chinese takeaway in Walworth. They also offer delivery, and you can order online from Just Eat.

Kake and bob tried the delivery option on a Friday evening in August 2009. Food arrived on time, and sensibly packaged.

Deep-fried crab claws (£3.50) were pretty much as expected; crab-flavoured surimi moulded into balls and coated in bright orange breadcrumbs. They were fine for what they were, though. Peking-style chicken wings (£3.20) were alarmingly red in colour, though clearly at least some of the colouring was natural; the meat just underneath the coating had a distinct flavour of turmeric, and was stained yellow with it. Kake's chicken and sweetcorn soup (£1.70) was fine but nothing special, while bob's hot and sour soup (£1.70) wasn't bad, but could have done with more chilli.

Aromatic crispy duck (£5.80 for a quarter duck) was disappointing. bob found the meat quite difficult to shred, while the pancakes tore at the slightest touch and the hoisin sauce tasted of sugar and nothing else.

Crispy shredded beef (£3.60) wasn't great, and we were surprised to find meat in the plain chow mein (£2.20 for a small portion). Fried tofu with ginger and spring onions (£3.20) was better, with a good spongy texture to the tofu allowing it to soak up plenty of sauce.