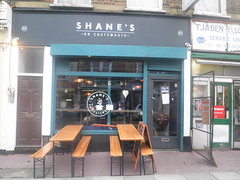 Shane's is a very small but charming restaurant on Chatsworth Road in Lower Clapton.

Kat and Rick visited on a Saturday evening in June 2012. We had booked earlier in the day via Open Table and it was a good thing we did, as by 8pm the 6 tables and the handful of bar stools were all filled. The clientele were older, quieter and less trendy than the usual Chatsworth Road crowd, which suited us just fine.

The waiting staff were enthusiastic and very friendly - our server asked our opinion of the (free) bread, which her colleague had baked that morning (it was good!), and was happy to discuss the menu and the wines. The winelist itself wasn't huge but offered by-the-glass and carafe options for around half of them. The beers were all bottles from the London Fields Brewery, unfortunately stored on their sides in the wine fridge (there really wasn't a lot of space!) which caused some cloudy sediment issues. Filtered water was provided on the tables for a small surcharge (a portion of which went to charity), but we were also offered the option of free tap water instead if we preferred.

Rick was very pleased with his starter of salt beef croquettes ("pubs should serve these"), which were scotch-egg sized and very good value for £3.50. Kat's gnocchi with broad beans and peas (£6.50) was fine, not too stodgy nor too heavy on the mint. Mains of roe deer (£17.50) and steak frites (£18) were perfectly cooked and very tasty, with no real surprises. Dessert wise, rhubarb fool (£4.50) was served in a champagne glass and quite heavy on the cream, but the homemade ginger snap biscuits accompanying it were excellent. The chocolate pot with rose jelly (£5) was also cracking, especially with a small glass of port.

Kat's verdict: I thoroughly enjoyed our visit and would recommend it if you're in the area. The atmosphere and friendliness of the staff ensured we will be returning soon.

Accessibility: A single toilet is down a narrow, slightly awkward flight of stairs.