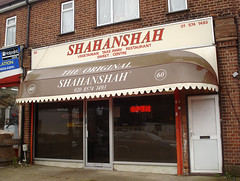 Indian vegetarian cafe and takeaway in Southall. It used to have another branch on South Road, opposite the Himalaya Palace Cinema, but that one (like the cinema) has now closed.

It's brightly lit inside, with basic canteen-style decor. Seating is provided for 24 people at small square tables, some of which are usually pulled together to create a couple of communal tables. Jugs of tap water sit on each table, with plastic cups and napkins stacked up on the serving counter.

All food is ordered from the counter, even if you're eating in, though they will bring it to you when it's ready — and once you've eaten, you need to queue up again to pay.

The menu photo as of Feb 2015 includes Indian sweets (priced per kilo), savoury snacks, and drinks, plus around a dozen main dishes and eight types of bread. Prices are very cheap, with savoury snacks starting at 40p for a takeaway vegetable samosa (as of Feb 2015).

Kake first visited in December 2008, for some takeaway vegetable samosas and paneer samosas. Both varieties had very good pastry; crisp without being either dry or greasy, substantial without being stodgy, and much much nicer than the filo-a-like stuff that some places try to get away with. The vegetable filling consisted of mashed potato studded with a few peas, rather than chopped potato; this worked well, and the spicing was good. The paneer filling was crumbled finely rather than chopped, and spiced subtly enough that although the first bite seemed a little bland, the cumulative effect was of a good level of flavour. The samosas came with a very good, tangy tamarind sauce which improved them even further. They were best eaten straight away, but still nice the next morning.

Kake visited again in February 2015, this time for eat-in. I arrived a little after noon, and had to queue up to order. There was a steady stream of customers while I was there, with never fewer than three people waiting. Service was friendly and welcoming; it was also somewhat leisurely, which partly explained the queue. Indian music was playing on the radio, interspersed with adverts for Asian businesses in various parts of London.

A vegetable samosa (40p) photo was just as good as last time, arriving hot and freshly fried with a generous portion of tamarind sauce. I also had a main dish of palak paneer (£3.50) and some rice (£2), which arrived with a small tub of carrot pickles photo of all three. The palak paneer had well-balanced spicing and plenty of well-fried paneer. The rice was cooked rather softer than I prefer, and included unsolicited peas, but was enlivened with cumin seeds and fresh coriander.

Accessibility: A step to get in. No further steps once you're in, but access to the toilet (a single unisex cubicle) is quite narrow and involves a 90-degree turn.