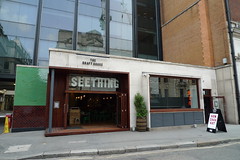 It has a rather industrial aesthetic, with lighting provided by large "bare bulbs" dangling from chains, unvarnished bare boards everywhere, and four copper-effect tanks above the entrance, purportedly containing Pilsner Urquell. In good weather part of the front is opened up, creating a sort of small decking area that leads out from the interior.

Kake visited on a Friday afternoon in August 2015. There were a fair few people in when I arrived around 3:15pm, mostly men in suits, mostly spread around in twos or threes, but still a good number of tables free. Music was playing, loud enough that I'd have had trouble following a conversation if I'd been trying to have one.

On handpump there were five real ales and one cider: Tiny Rebel Cereal Killer, Adnams Topaz Gold, Sambrooks Wandle, Tempest Caledonian Blonde, Sun's Up Table Beer, and Sheppys Orchard Dew cider. The 16 keg taps included Camden Ink Stout (£2.40/half) and Hoxton Cidersmiths Michelin & Browns (£2.25/half). All cask and keg offerings were listed on a menu available on each table photo, and all were available as thirds, halves, or pints. Service was friendly and efficient.

According to the Draft House website as of August 2015, food is served noon-10pm Mon-Sat, and includes burgers, mains, and bar snacks such as sausage rolls and foot-long pork scratchings. Vegetarian options are scarce. On our visit in the same month, we tried a half pint of pork scratchings (£3.90) photo. They were OK, a less fatty and salty style than you usually get in packets, but perhaps veering a little too far towards over-browned for Kake's taste. One of them was inedibly hard, too.

Accessibility: A ramp to get in (right-hand entrance). The tables are fairly widely spaced and almost all normal height. Step-free throughout, and there's an accessible toilet.