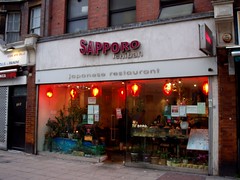 A sushi restaurant in Catford, very near to Catford Bridge Station (and Catford Station as well).

This restaurant is just off the main street alongside the stations, and opens into a foyer with a large fish tank. Inside, there is plenty of seating stretching past the sushi counter, and takes in a raised area with sunken seats photo at tables seating around six people each. On a Tuesday evening at 8pm, the place wasn't too busy and we were easily seated. A return visit on a Friday evening in August 2008 found the place not very much more busy with only three or four tables occupied, though the place had filled up nicely by around 8:30pm on a Thursday in October 2009.

On our June 2008 visit, a large selection of food was sampled, both side dishes and mains and the total price worked out at just over £20 each, including a modest amount of alcohol. Of the side dishes, vegetable tempura was good, hot and crisp but a bit greasy, while the agedashi tofu was fine. The kimchee was generally adjudged to be excellent, with good vegetable texture and chilli flavour as well as heat, and several reorders were made.

Avocado handrolls were served in a neat little wooden stand to hold the cone-like shapes upright, and considered by Ewan and Jo to be really very good indeed. In general, the rice in the nigiri and rolls was fine, certainly nothing to complain about. The fish was mushy, particularly the seabass, though the mackerel was OK. Kake suspects freezing issues, so would suggest sticking to the fattier fish.

On Ewan's return visit in October 2009, they were out of kimchi but suggested a seaweed dish (£3) photo that was reasonable if no match for their kimchi. More successful were the lovely bite-size chicken kara-age (£3.50) photo, while vegetable tempura was fine (£4.50) photo. For our main, we had the Sapporo sushi set (£20.50) photo, which included 12 nigiri, six California rolls and four excellent 'fashion sandwiches' (styled like cut sandwiches, but sushi) photo.

The desserts were fine, though the sesame ice cream was particularly nice.

Ewan's verdict: Perhaps not worth a trip across London, but for those in the south-east, this is an excellent and good value choice for sushi.

Kake's verdict: I'd come back if I happened to be in Catford again, but would probably stick to the vegetarian sushi and the hot dishes next time.

Kerry and Ewan's subsequent visit in late 2010 found the quality was still high. On a Thursday evening at 7pm, we were one of only three occupied tables in the restaurant, but it seemed to be filling up as we left at 8:15. We opted for a mixed set menu, which was good value at about £15.