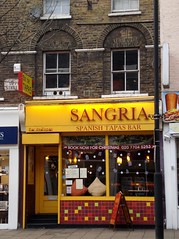 Spanish/tapas restaurant on Upper Street in Islington. Time Out suggests that it is, or has been, connected to Jamon Jamon in Camden Town.

The interior is divided into a number of areas, with the front part made up of a combination of banquette seating (with large colourful scatter cushions) and normal chairs and tables. A little further back is another seating area, and there's even more seating upstairs.

Kake visited for an early lunch in December 2008. Arriving around 12:15pm, I was the only customer until a few more people turned up about half an hour later. Flamenco-style music was playing, though not annoyingly loud.

I took advantage of their "two tapas for the price of one" offer, available noon-3pm Monday to Friday, and ordered berenjenas gratinadas (grilled aubergine in a bechamel and tomato sauce topped with cheese), ham croquettes, boquerones en vinagre (fresh anchovy fillets marinaded in a parsley and garlic vinaigrette) photo of these three, and gambas al ajillo (sizzling prawns cooked in olive oil with garlic and red chilli) photo for a total of £12 (excluding the auto-added 12.5% tip).

The anchovies were very good; large meaty fillets with plenty of chopped garlic on top. The prawns were also very good; they did indeed arrive sizzling, and they were quite large and not at all overcooked. The ham croquettes were a little too smooth and cheesy for my taste, with a texture reminiscent of over-whipped potatoes. The aubergines were also not really to my taste; the cheese was in a thick layer on top rather than being incorporated into the dish, and with the cheese layer removed the bechamel sauce was revealed as being rather bland and stodgy.

Kake's verdict: Mixed. I'd not have been too happy to pay full price for what I had, but at half price it was fine.

Accessibility: Three steps up to get in, and the toilets are up two flights of stairs.