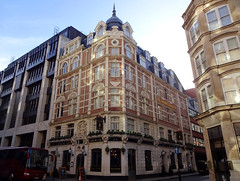 Kake and bob visited on a Sunday afternoon in December 2008. There were hardly any other customers at all, and since the place is quite big it almost felt like we were there on our own. Christmas music was playing. Ales available were London Pride (£3.10/pint), ESB, and Chiswick. The Discovery was off, but they hadn't turned the clip around.

According to the 2007 Good Beer Guide, food is served all day until 9pm. Accommodation is also available in the form of 34 guest rooms.

Accessibility: Small step up to get in, toilets down a flight of stairs.