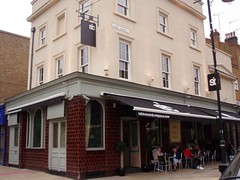 The Salmon and Compass was a pub at the end of Chapel Market, near Angel Station. It closed on 12 April 2009 and was replaced by a "pub and eatery" called The Compass (which has now closed in its turn).

A pub at the end of Chapel Market, near Angel Station with an attractive glazed red brick exterior.

Inside has been thoroughly gutted and can have the slightly soulless feel of a modern pub conversion: chrome bar, leather seats and tables, a large open dancefloor space which, depending how busy it is, can feel empty as most of the customers stick to the tables outside under the canopies, or the seating under the windows around the edge of the room. On a return visit, when the place was busier, it didn't seem so bad, though. The banquettes are comfy, and the staff are generally very friendly. It's probably livelier on a weekend evening, as they have a late licence, and it's a popular part of town.

There are no ales on tap, just lagers (Budvar, Staropramen, Hoegaarden, Beck's Vier, Guinness) as well as some bottled beers and ciders.

Food is served, including roast on Sunday (beef or lamb options), burgers (around £7 each, including a vegetarian, £6.50, which Ewan has had a couple of times, and was pretty tasty, with decent chunky fries to accompany it and a token bit of salad) photo, and a tapas menu of small plates for £4 each. Fries (available as regular, curly or wedges) are £3.50 are decent: the wedges are encrusted with salt and pepper and very nice though there are not enough of them. Nachos are more substantial.