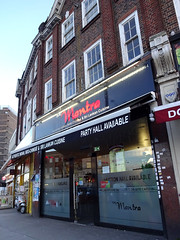 Indian and Sri Lankan restaurant in Gants Hill, also serving Indian versions of Chinese food. They do takeaway and delivery, with online ordering via Just Eat.

It's quite smart inside. Padded banquettes line the walls, surmounted by large arty monochrome prints of landmarks from around the world: Chichen Itza, Christ the Redeemer, the Great Wall of China, and so on. Dark linen tablecloths contrast with bright white neatly-folded napkins, and a carved wooden screen guards the door.

Kake visited on a Thursday evening in March 2017. There were no other customers when I arrived shortly after their opening time of 5:30pm, and this remained the case throughout my visit. Music was playing, fairly interesting, not too loud.

I started with chilli mogo (fried cassava in sweet chilli sauce, £6) photo. It was a large portion for a starter, easily enough for two or three people, but delicious enough that I had to persuade myself to stop eating it in order to leave room for my main (they were happy to pack the rest up for me to take home). The sauce was very well balanced; not too sweet, and with a good savoury flavour. Red and white onions, spring onions, and green peppers added interest, and all these were also well-judged.

My main of seafood kotthu roti (£7.50) photo was fine, though not the best I've had. The roti was a bit chewy, and the seafood seemed to mainly consist of squid, though I found a few pieces of prawn too. Although I was warned it was spicy, it wasn't particularly so to my palate.

Accessibility: No steps to get in. There is a wooden screen directly inside the entrance; although they could almost certainly move this on request, it does make it hard to get the attention of the staff until you're already well inside the room. No steps to the ladies', which is a large cubicle that doubles as an accessible toilet.