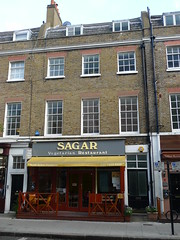 South Indian vegetarian restaurant in Fitzrovia, part of a small chain that also has branches in Hammersmith and in Covent Garden (their Twickenham branch has closed).

Kat and two friends visited on a Friday lunchtime in February 2009. Although the front of the restaurant was very busy, there were still empty tables near the back at 1pm. After a brief wait for our order to be taken, the service was efficient and friendly. The waiters were happy to provide tap water. We each had a poppadom and a main course, which came to around £8 each (including tip but excluding drinks). Kat had a delicious lentil pancake with onions cooked into it, which came with a dish of vegetable curry to pour over it. The dosas were also deemed very tasty.

On another Friday lunchtime visit by Kake, Kat, and Ewan in June 2010, we started with a shared order of bhel puri (£3.25); the puffed rice in this was not as crisp as it could have been, though the overall flavour wasn't bad. To follow, most of our party went for the lunchtime thali special offer (£5.75, available noon-3pm Mon-Fri except Bank Hol, eat-in only). This was served in three stages; a poppadom, then a starter plate of a bhajia and a small dish of upma photo of three starter portions, followed by a thali set including a masala dosa, rice of the day, a couple of curries, raita, chutney, and a dessert photo.

Ewan has had the takeaway lunch box from them (most recently in early-2009), which provides a couple of small curries, some raita, salad, rice, and a small paratha bread. It's not enormous, but is filling enough for the price and comes in its own special segmented container. As of June 2010, this costs £3.50 and is available noon-3pm everyday including weekends.

Kat's verdict: I would like to return and eat some more pancakes.

Accessibility: The toilets are in the basement, down a flight of stairs with a sturdy handrail on one side.