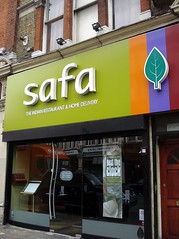 Indian restaurant/takeaway on Camberwell Church Street in Camberwell. They also do delivery, and you can order online via their website.